Overlooked by the mainstream media, the name Ilya Kuvshinov began to rise in popularity after the release of the film Birthday Wonderland in which he collaborated with the director Keiichi HARA. He he was in charge of the artistic conception of a full length film for the very first time in his career, and so his drawing style left a lasting impression.

It’s time to learn, with a biography, a review and an interview, more about this Russian artist that made a name for himself in Japanese animation despite his unusual career path.

To exceed expectations: the shônen spirit

Ilya acquired a classic formation in the arts at the Moscow Art Lyceum for 11 years where he mainly practiced drawing landscapes, still lives and sketches… nothing particularly exciting in comparison with the animation, manga and Japanese video games that he just discovered. Still, his teachers rejected that style of drawing and deemed it as “not very academic”.
He pursued further education in a university that taught architecture, assuming that the job of an architect would be the only way to make a living from drawing, his true passion. Unfortunately, the lack of creativity in the profession became a source of frustration for Ilya since it consisted only of copying and making a faithful representation of a client’s request without any attention to composition, light, etc. About this time, he began to create illustrations with a “manga-like style” which fulfilled the cravings of his imagination that had been neglected after many years. As well, he participated on an interview where he mentioned the difficulty of trusting his imagination and creativity in order to create a character from scratch after such a rigid and academic education in the arts.

Nonetheless, just like the heroes from Shonen, Ilya loves taking on challenges and excels at facing the most difficult circumstances. His education as an architect gave him the ability to draw sceneries and backgrounds skillfully; nonetheless, drawing characters and particularly girls, wasn’t his area of expertise. Thus, he made the decision to practice… until it became his biggest strength. 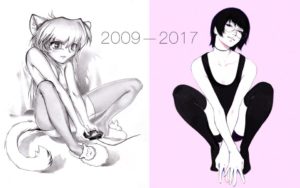 Some of the mangas that inspired him the most include Yokohama Kaidashi Kikou and Sing yesterday. When it comes to anime, his greatest influence seems to be Ghost in the Shell. He stated that such film is the main reason behind his wish to become an artist and tell stories, though he was not sure about the medium he wanted to use at the time: manga, film, anime or video games? He mentioned other sources of inspiration, for instance: Hideo KOJIMA, Naoko YAMADA, JK ROWLING, Hayao MIYAZAKI, Stephen KING, Satoshi KON, etc.

At last, he landed his first job as an illustrator for a video game’s magazine at the age of 19. Two years later, he was hired by Globo Games as a lead concept artist, making him responsible for the creation of characters, places, scenery, among other elements. Even though Ilya was praised for his characters, his academic background proved him to be a multi-skilled artist who is able to adapt to any theme. After working on studio NARR8 he was recruited as an art lead, position which implies even more responsibilities that vary from the creation of a story board to colorization and character design. It was at this point in his career that, in addition to his work, he began studying anatomy every afternoon and learning the notions of perspective. He was determined to maintain a steady working pace and post a fan art on social media every afternoon. According to him, this period was crucial in his career and helped to develop his skills as an illustrator. 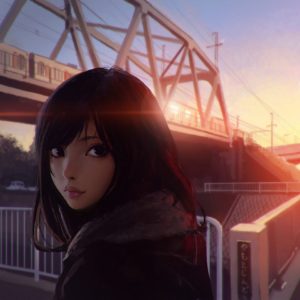 All things considered, his career path in art led him to work his way up in the professional market but also perfect his technique as a freelancer, in fact, most of the revenue from his work comes from the platform Patreon. Moreover, he continues to be extremely critical of his work and considers his fans as guidance; if someone loves his art and he’s able to bring happiness with his drawings, then he has achieved his goal. Even though he is inclined towards certain styles and color palettes to include in his drawings he keeps experimenting with different techniques, as a matter of fact, he believes that he hasn’t found his definitive style just yet. On the contrary, despite the choice of model, he cannot avoid drawing a specific someone: young girls with short hair who, in his opinion, “represent strength, energy, independence and bravery!”

Above all, he considers teamwork as his favorite work method and believes that witnessing a collective project as the final result of teamwork is the most satisfying feeling. At last his freelance projects allowed him to approach the film industry after the release of his art book MOMENTARY which caught the eye of the filmmaker Keiichi HARA who eventually gave him the opportunity to create the artwork for his film, Birthday Wonderland. 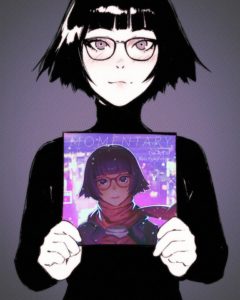 The first aspect of this art book that may come as a surprise is the choice of format. As the artist explains on his book, such format fits his drawing style because it “perfectly captures all emotions”; as well, he invites his audience to focus on specific parts of the drawings, for instance, the hands or the face of the characters. Following this note, we began to contemplate the artist’s most beautiful portraits to understand the meaning of said format choice. The book also includes six notes which reflect the stages of the artist’s life that will be elaborated on the next remarks. Indeed, he touches on his time as a concept artist in video game companies who specialize in science fiction and shows off his talent in that genre of illustration. Alongside, he looks back at his experience in art school where he was constantly required to draw sketches and includes several pages of examples that surround the topic of daily life such as maps or transportation mediums. 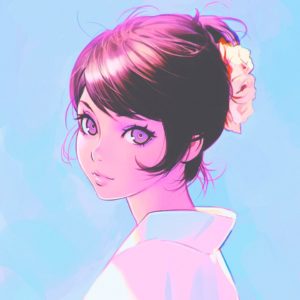 Most of the work comprised in MOMENTARY are original pieces that weren’t announced (before the book’s release date) but the most popular drawings, which you surely have seen on social media before, are also included. Besides the aesthetic quality of the format, it is also really convenient since it’s easy to hold even with its 192 pages. The paper is slightly glossy to prevent the corners from ripping apart which also emulates that cartoonish sensation when you are filliping the pages.
Ilya Kuvshinov’s style has something extremely fascinating about it, his approach to drawing the eyes of his characters is a key attribute of its uniqueness… but there is something about the depiction and composition of the images and the extreme care for the pupils that makes every single character seem like he or she has a story to tell. After browsing his designs on Facebook and Instagram we were captivated by so many details and had no time at all to focus on one aspect at a time. To discover or even to re-discover this art and really taking the time to appreciate every small detail is a delightful experience.

Even though we had the opportunity to meet Ilya Kuvshinov during the release of Birthday Wonderland at the « Festival d’Annecy », this article wouldn’t be complete without a new interaction. This time the questions were not mainly about the movie but about the artist himself…

Journal du Japon: Your characters seem really « alive”! It feels like they have their own backstory. Do you start your illustration by creating a story for your character? Is it important to you to create those backstories?
Ilya: Thank you! Yes, I usually create some limits for the concept and idea of an illustration to be more creative with the outcome! So, usually I decide on creating a certain character in a certain situation with a certain emotion to express before starting an illustration, then just try to create the piece in the best possible way to show this character’s moment in time.

Drawing a good character, is it just about drawing skills, or do you think you also need to inject a little piece of your « soul » maybe or something else to make it complete?
The skill and creative idea are really separate concepts for me. I think you can totally go with just one of those to create something that will resonate deeply with the viewer, but mixing both skill and idea the best way you can do usually could not only be something more than a pretty picture, but could also become a part of your own personality and even help to improve your views on the things outside of the theme you’re concentrated on.

If I understood well, you have a full-time job and contracts with various studios, your activities as illustrator on Patreon… How do you manage to survive Ilya?
Patreon is the most beautiful thing happened to me financially. Having all those people to support my personal works and be here for me is motivating, humbling and just unbelievable. I can’t be grateful enough to all my awesome patrons for what they have done to my life. 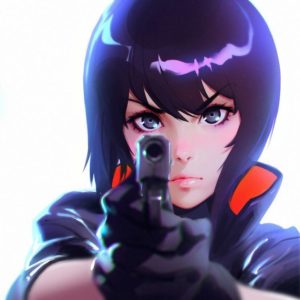 What are your current projects?
I work on the new Ghost in the Shell: SAC_2045 series as the lead character design artist. And there’s a couple of secret projects too, with games and anime.

You say in one of your Instagram stories that you came to Japan to be part of the industry and learn from veterans. The early days must have been tough since working independently is not helping to meet people and build a network… So, “Wonderland” really helped you to “get your foot in the door”, right?
Yes, the first years of living in Japan without understanding exactly what I should do to work in the industry were full of anxiety and uncertainty. I got my first job on animated movie thanks to my first artwork collection book MOMENTARY, so actually just learning the language and improving my drawing skills were the right way, but I would have never gotten this dream job without the editor of MOMENTARY, Keiko KINEFUCHI, who contacted me to create the art book in the first place or Keiichi HARA (the director of Birthday Wonderland) had never found my book in the bookstore.

While listening the « art café podcast », we understand that you are a very creative person who want to tell his own stories beyond drawings. Don’t you feel like “restrained” right now? Don’t you want sometimes to focus on your own projects, like your manga “chromatiq” for example?
My goal is to become an animation director, do storyboards and inspire people with entertainment like anime and games, but right now I am really happy to be a part of projects I adore so deeply.

You got your start in the video games industry, from illustrator to concept artist and then art lead. Do you have a preference between working on anime or video games?
I am all about the good stories. If the story is good and the characters are unique, be it anime, game, movie, or novel – I’d love to be a part of it.

Our gratitude goes out to Ilya Kuvshinov for making time for this interview despite his busy schedule. As well, we thank Ms. Keiko KINEFUCHI who made this meeting possible.