When we are talking about EDM, you first think about its western representation like Skrillex, Avicii, and other stars you would rather dance on than listen to, hence the meaning of the genre : Electronic Dance Music. But there are a lot of sub-genres within this single genre : Trap, Drum and Bass, Techno, Trance, House… as well as Hardcore ! This sub-genre again contains a few more genres like Gabber, Breakcore, Speedcore… etc. A whole world of variety capable of giving birth to true artists, like Camellia. 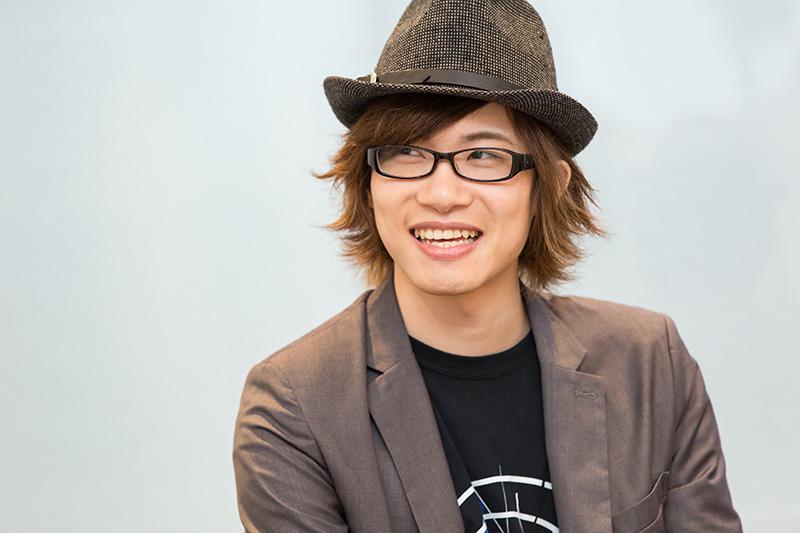 At 26 years old, the discography of Masaya Oya includes a total of 28 albums, 4 EPs and more than a hundred appearances with other artists. Unlike composers in the same domain, like Kobaryo and the Speedcore, or USAO and the Hardstyle, Camellia gave up on a main style to fall within several genres at the same time. His wide area of expertise does not fail to surprise many : Dubstep, Hardcore, Trap, Gabber, Drum n Bass, Trance… His name rings throughout the rhythm game scenes with his electro and often fast songs which are more than appropriate for bewildering stages.

Beginning of his career alongside Hatsune Miku

Hanîjinjâêru is the first album which he released at only 18 years old. He was first known for being a Hatsune Miku – the voice synthesizer – VOCALOID artist with which he released 5 albums in the space of 3 years, and this goes without counting the several appearances with other artists. Furthermore, in 2013 he released Systematic Love, which was covered by the well-known japanese singer REOL 2 years later. From the start, Camellia stood out with his amazing productivity and a different style which mixes VOCALOID and hardcore electro.

« Rather than quitting completely, I’m trying to make VOCALOID whenever I have the chance. However, I think that’s because writing music to a rhythm game and dôjin composing (activity in the japanese indie music scene) is now my main activity and it’s becoming my top priority. » he explained.

By the end of 2013, Camellia slowly quit making VOCALOID as a main activity and focused on doing electro-only music.

« And now, VOCALOID composers almost always release their songs along with a music video, that seems like a lot of work for me. […] Mass of heart made me the most effort with murAta Yuzi who made the video. » adds the musician.

With his popularity already set in stone during his debut as a composer lead to him being able to make a changeover into the hardcore electro scene, which was smoothly done through the release of his album paroxysm a year later. The tone changes without losing his fanbase and the sweet voice of Hatsune Miku is replaced by a 200 BPM, nervous, but nonetheless melodious resonance. This tone completely suits what you can find in arcade’s rhythm games such as Sound Voltex or beatmania. This is not a coincidence, as Camellia collaborates with these licences to provide playable music for their games.

« Also, if I imagine a scene of rhythm game like BEMANI, I can name 2 songs, Bangin’ Burst and Bassdrop freaks. The former is a song that received the best award at the contest in SOUND VOLTEX of KONAMI, and many people still play it. »

Indeed, contests are held so artists can see their own creations being implemented in rhythm games and become playable by everyone.


« The latter is a song recorded in beatmania IIDX. I think I was able to strongly impress our tag with Nanahira, its vocalist »

Great transition to now discuss this duo of Nanahira as the vocalist and Camellia as the composer. Both artists first started working together in 2012 where Camellia was the arranger of Nanahira‘s music. In 2014, the duo takes the center stage with Bassdrop Freaks which won one of the aforementioned contests and was added to the beatmania IIDX saga. « I think I was able to strongly impress our tag with Nanahira » he says, humbly, while it is one of their most popular songs.

The collaboration does not end here, it’s actually quite the opposite. A few months later came the album Bâsasu!, which recreates the successful recipe of a kawaii Nanahira and Camellia‘s mixing of hardcore electro and j-pop instrumental. The duo is just as successful to this day, as shown through their numerous albums throughout the year either under the label of Nanahira, Confetto or Camellia‘s label KamelCamellia.


The high pitch voice Nanahira use (usually called kawaii) takes its roots in the denpa music. This genre is mainly inspired by the otaku culture. It’s conventions are a disordered melody accompanied by a kawaii voice and meaningless lyrics, which most of the time repeat themselves, as if to hypnotise the listener. Bassdrop Freaks can be considered as denpa music, but Can I Friend You On Bassbook ? Lol is the perfect example.

« I was asked to arrange music for her dôjin CD several times because I was a composer who could make denpa songs; there are not many people who can actually write denpa songs. »

Another style he has mastered in !

If we are to talk about hardcore, we must talk about the HARDCORE TANO*C label which focuses on hardcore music only. This label has been gathering the greatest names of the japanese hardcore scene since 2003 by it’s founder REDALiCE.

« When I started to be interested in club music with the influence of my first appearance in a rhythm game, I met DJ Genki, one of TANO*C‘s member and he pulled me into their friendship. Unexpectedly, Genki and I noticed that we lived sooooo close and we used to play together (even now). »

All those artists rarely work on their own. It’s common place for them to work together and once you know about one, you will quickly learn about two others. For instance, the collaboration between DJ Genki, Camellia and C-Show on the album Kasai Hardcores, which makes the crowd explode from joy during TANO*C concerts.
What first made TANO*C what it is today is their live performances called « Strike ». At first, they used to occur in small halls, Djs would play a few songs of theirs before switching with another artist, the whole concept with a psychedelic background. As the years go on, they left the term « Strike » behind but the formula remains the same. Halls are now larger, and the same can be said to the audience. Camellia could participate in their tour in 2017, which gathered more than 20 other DJs.


Camellia outside of Japan

One of the main reasons Camellia was able to take a first step outside of Japan is the video game osu!. Free and available on computers, this rhythm game has players all around the world ; and they are creators themselves ! This is unlike BEMANI‘s games in which the community does not contribute to the development of the games (like the aforementioned games). osu! Players already knew Camellia through games like beatmania IIDX or Sound Voltex and started putting his songs into the game.

« To be honest, I have not recognized any fans abroad for a long time. However, what I noticed later with the fans of osu! and other rhythm games fan communities was that a lot of people found me from osu!. »

Over the years, Camellia‘s music became so much more popular that the creator of osu!, Dean Herbert, decided to include him in the list of featured artists in December 2018. Some of his songs are now a kind of anthem among the community. For example, Exit this Earth’s Atomosphere has reached more than a million views on Youtube, just like many of his other songs.

His thankfulness to his fans lead to him naming one of his EPs Thanks Twitter Followers 40k E.P.. In his latest album heart of androids, he also named a song Quaoar (For « Thanks Follower 50k »).
From time to time, Camellia will go live on the streaming platform Twitch and start to compose music while talking with his viewers. And those viewers mostly come from the western hemisphere, just like in his Discord’s server (computer and smartphone application which allows people to converse with each other about different topics) which reached 4000 users in less than 8 months of activity. He announces his future albums, concerts and many more exclusives information for his most faithful fans on this app.

« There are also country surveys on YouTube and Spotify. They tell me which country is listening to my songs. And in fact, interestingly, the country with the most fans of my Spotify is not Japan but US. And Japan is going to be in third place. I think I have overlooked so many oversea fans, I have a little regret, but I will try to communicate, and take great care of them. » 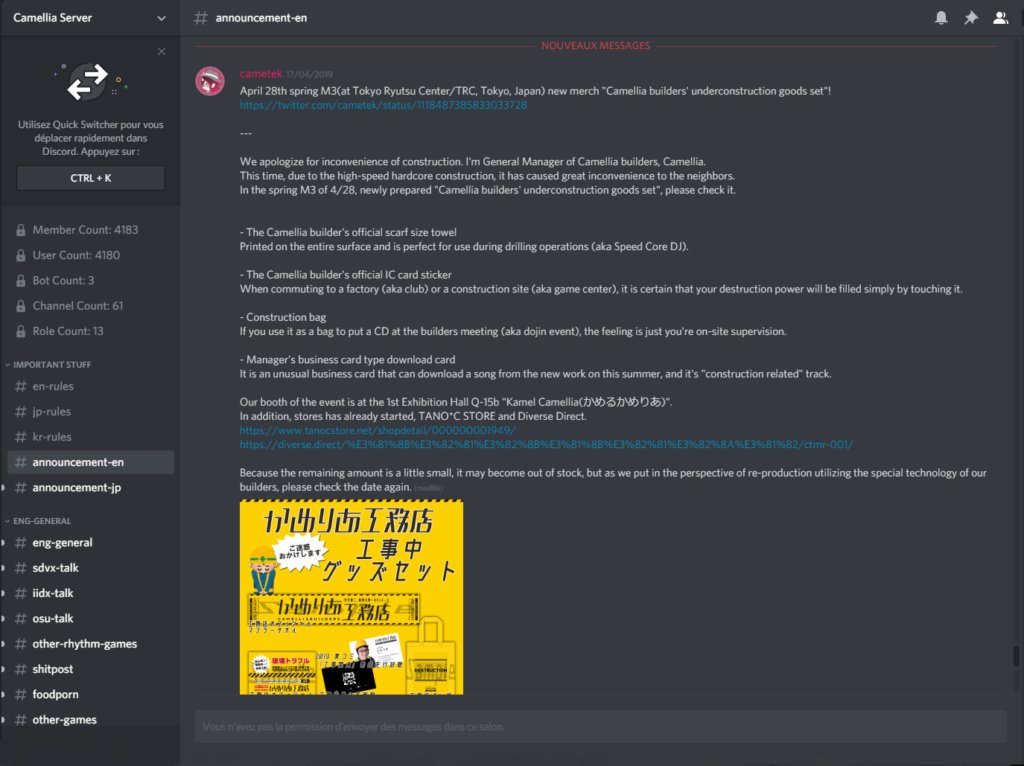 Camellia is different from any other EDM artist by the wide range of genres he can compose, as well as his close relationship with his entire fanbase. He’s so prolific that a full article about him would be impossible to make, even so, we wish this opened a door towards the huge world of the japanese EDM scene.

Thanks to Camellia for the time and kindness he gave us during the interview and thanks to yukii, shibe and Eliteronix for helping me out with this english version. 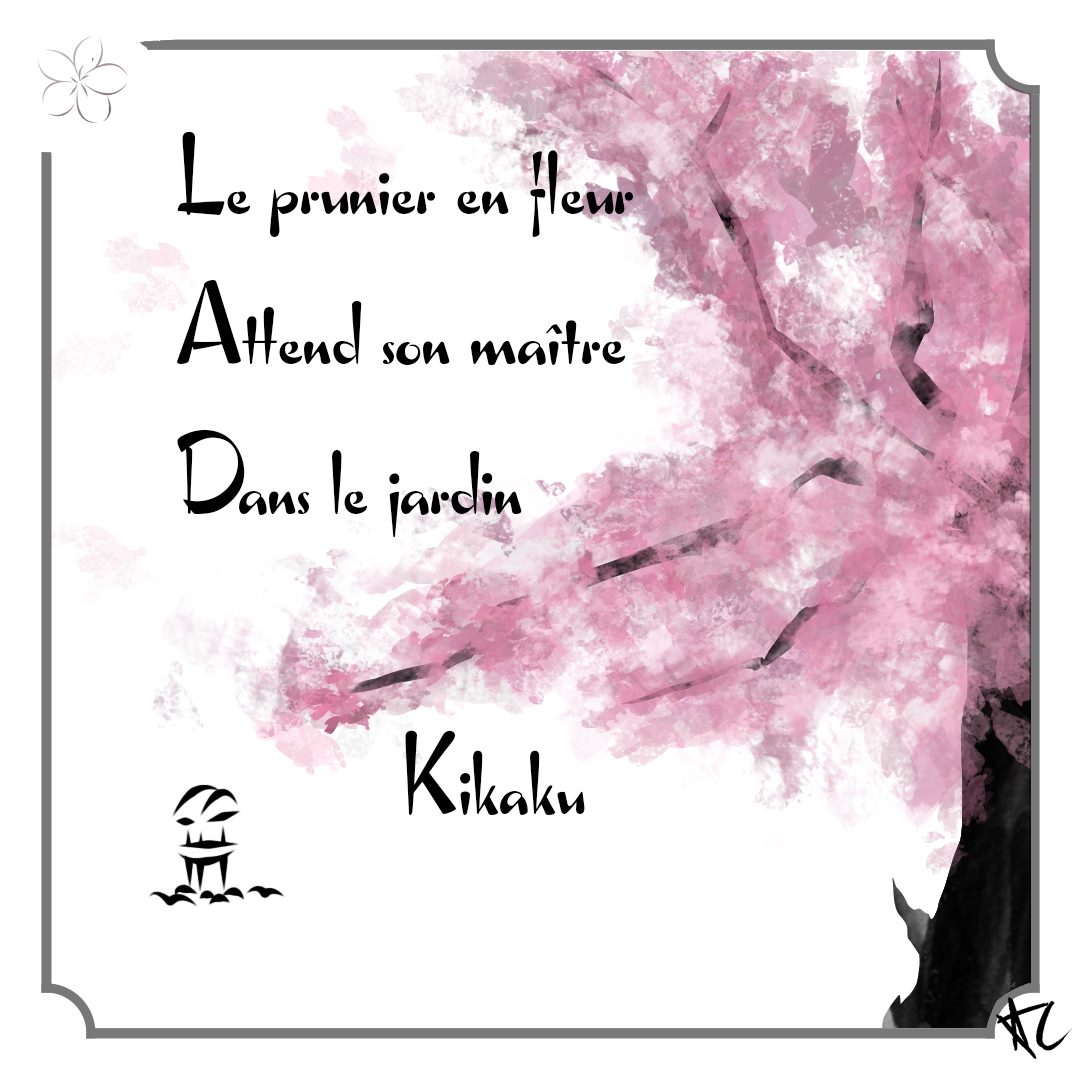