In the huge Japanese music production, we always can meet new duets and have fun meetings. Today Journal du Japon highlights a group that just stars his career, the french-japanese duet, nMy, who wants to offer us sounds with eclectic and varied sounds.

We went to meet those two music lovers… 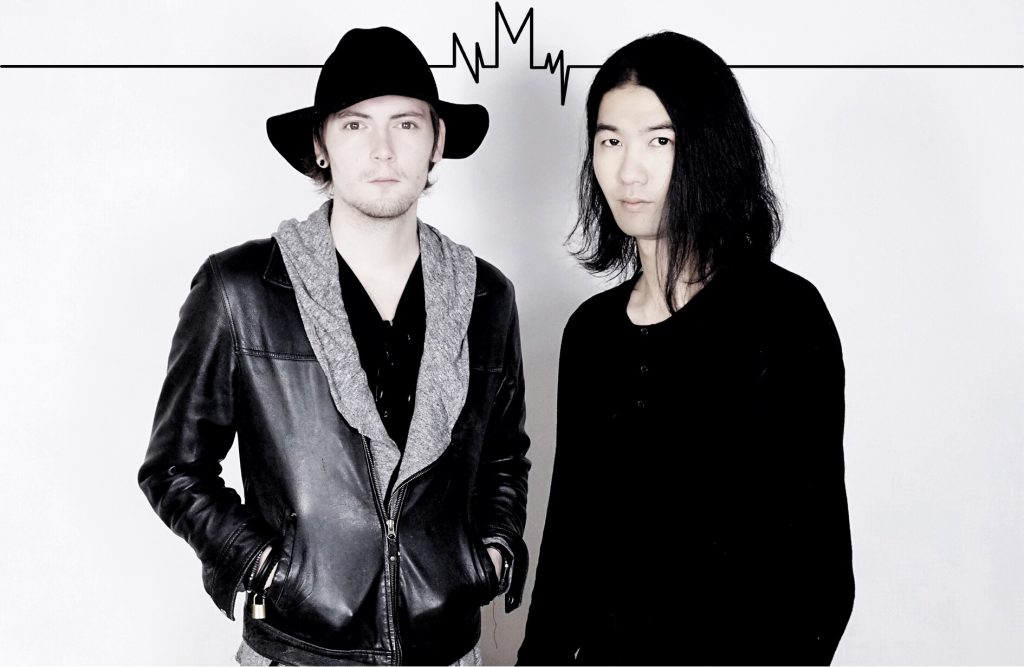 Journal du Japon : Hello to you two … To begin, could you introduce yourself individually?

Necky : Hello, I’m Necky nMy‘s n! I am Japanese and I lived abroad since my childhood up to college in different countries like Holland, Pakistan and Australia, which led me to speak English fluently in addition to Japanese. Upon arriving, I wasn’t able to speak neither English nor the local language, I spent most of my time watching MTV and listening to different kinds of music, which led me to become a musician eventually I guess (laughs).

Mitsugi : Hello, I’m Mitsugi (Mitsu for short) the M of nMy. French born in France! Personally I have always lived by adoring the different aspects of Japanese culture since I was a kid. According to my mother, I had already planned to go work in Japan back then. (Back in the day, I wanted to become a creator for Gameboy and SNES). I was lucky to have a Japanese community around me, which allowed me to speak Japanese very early. As for music, I’ve always been in love with music but what really got me started was when my mom bought me my first guitar when I was 10 years old.

How did you meet each-other ?

N & M : Actually, we met by chance in a bar in Tokyo. We had a lot of friends in common but we never met before. It was on the birthday of one of these friends that we saw each other for the first time.

Can you explain your project?

N & M : First of all, nMy stands for n -> necky M -> Mitsugi y -> “and” in Spanish which indicates that we are featuring another artist on every song. We chose this name because you can read it as ” enemy “; we want to be the enemy against other musicians (featured artists), in the sense that for every song, we want it to be like a battle than a collaboration. That’s why the VS in the title of a song … Though we’d like to clarify that we get along very well with other musicians. ( Laughs ) 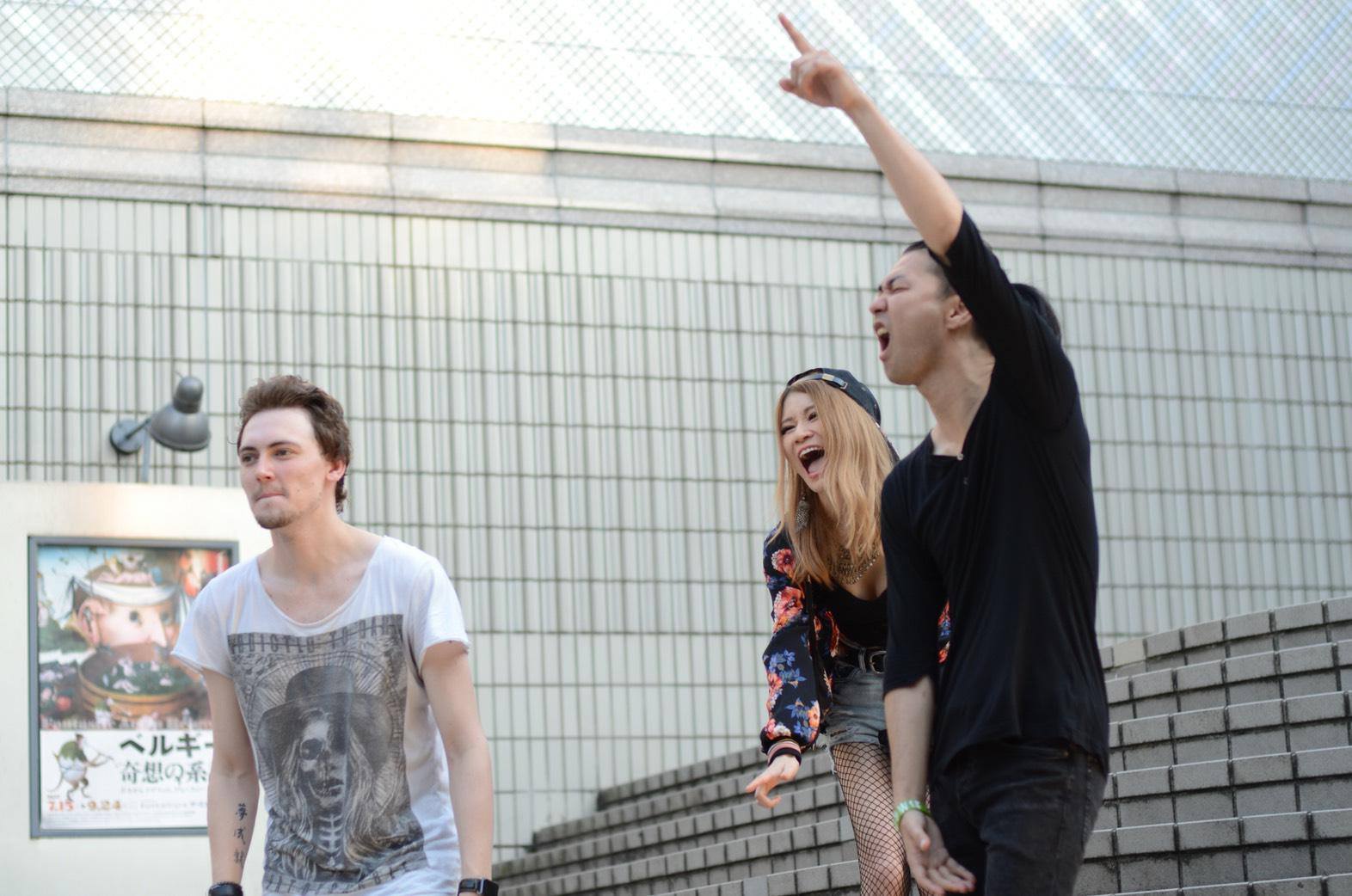 Could you describe a little bit about your musical style?

M : We are idols, we will dominate AKB! ( Laughs ) No, actually, we don’t really have a particular genre. We make the music we love by going through all the musical genres if it improves the quality of it. Each of our songs will be very different I think!

What are both your favorite music genres?

N & M : We have pretty much the same references both, from metal, hardcore, pop punk and pop, to even more electronic sounds. It’s very hard to choose particular names, we really listen to everything.

So what are your models?

N : Quentin Tarentino! (Laughs) I really like his musical choices in his films, as well as his achievement! If I have to mention another artist then that would be hide!

M : I have a lot of icons starting with Hyde, Jared Leto, and Brandon Boyd …

Can you now tell us just about the first song you released? And your MV?

N & M : This song is kind of like our meishi, our business card! (Laugh) We introduce ourselves, we explain who we are, and how, whatever the difficulties that may come before us, we decided to overcome them and do just what we love! It was also our best song to use for launching the nMy project! For the video, we wanted to limit the location to Shibuya which is kind of like our home town; we are there almost every day, we basically live there, its the city we spend time with our friends, and the city where the music is born. On a side note, we shot it in the middle of summer, 35 degrees (95F) outside, we were sweating between shots … It was a very difficult shoot but we loved doing it and we can not wait to do the next one (very soon)!

N & M : For this project, we all do it ourselves (from music to mixing, even the MV we make it ourselves). To maintain our creative personality and originality, we decided not to engage in a record company. Despite this, we take this project very seriously and do it in a very professional way.

Which brings us to the fact that we have limits. Lack of equipment, for example, to do all that above. We plan to improve the quality as we go.

As for the surprises, we were pleasantly surprised by how people received our first song positively, as well as the other artists who support us and wish to even perform with us. It gives us courage and motivation to the future.

Does the fact that one member is French an advantage / a disadvantage, both?

N : I like the fact that Mitsugi as a “foreigner” brings us a certain freshness, he has something that I don’t have.

From a technical point of view, could you tell us how you compose your different pieces?

N : Us being both guitarists, we often start from a riff and we challenge each other to have something interesting. Then we improve everything until we have the sound we like. Mitsugi can play many instruments in addition to the guitar so we have material to make very quality songs. 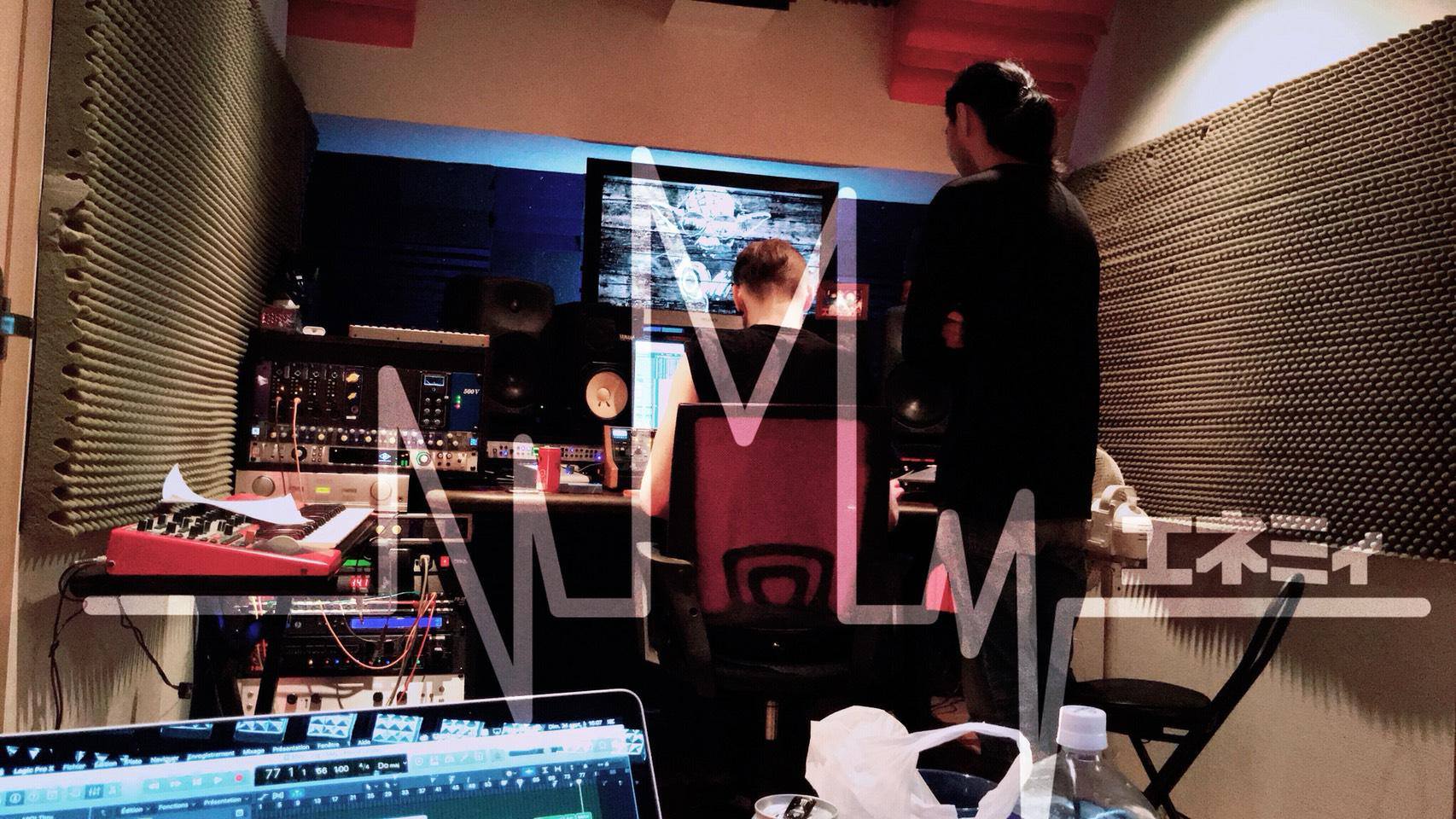 Similarly, how do you write your texts? What are your best sources of inspiration?

N : In our case, it’s the song that writes our lyrics. We always start by composing the music, then the atmosphere of the sound gives us the inspiration for the lyrics. We have a basic structure or guideline for each song; a pop song, bit of rock, bit of hip-hop, but ultimately it’s the music that brings us the lyrics in the end.

M : As far as I’m concerned, my sources of inspiration are my personal experiences, the things I have lived through, the people I met, those who left too early…

N : I too often leave something very personal, but I add elements of fiction so that a lot of people can relate themselves in our songs.

Have you had other professional experiences? If so, what did it bring you for the realization of your project?

N : I’ve been an artist manager for many years, which gave me a lot of experience in the music industry.

M : I was lucky enough to be able to make music (especially for Dr Martens) and to contribute to musical projects with great Japanese artists ( Vamps, Ayabie, Ayaka), which helped me a lot in the understanding of musical world here. 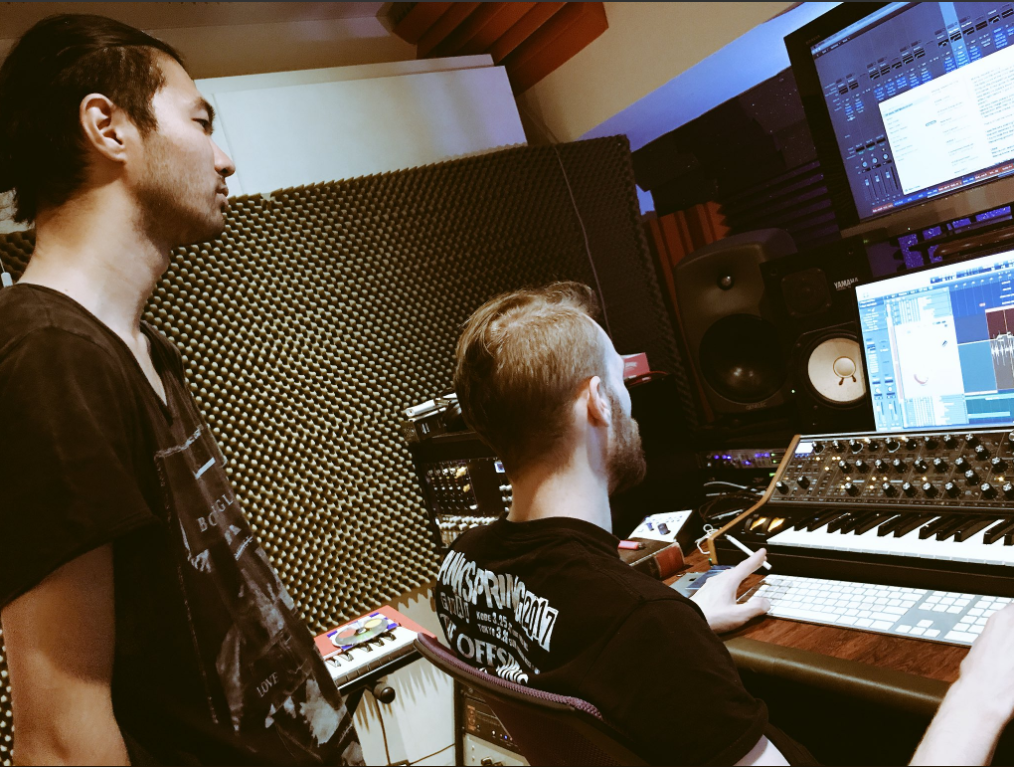 Do you have any ideas for the rest of your adventure? Are you planning to come to France to perform in concert?

N & M : Yeah why not, it would be very interesting if we could be invited to France for concerts or even for collaborations with French artists! We are open for any experience! For now we will continue to compose and create good songs here in Tokyo!

It’s quite difficult to judge you on one song, what awaits us for the next, whether it is musically or in the messages that you want to transmit?

N & M : Our next song is coming out very soon, actually, we are in the studio for the final mix right now (laughs), it will be a very different piece from the previous one, with very punk, hardcore and hip-hop influences, this piece is our personal tribute to Chester Bennington who left us this year …

Our main message is the connection! We want to create a link between people, countries, breaking social barriers.. �That’s why as “enemies” we will continue to fight. If we manage to connect people who may look very different with our music, then that would be our greatest accomplishment!

We wish you, good luck nMy!

Follow nMy, websites and social networks of those two artists :

Discover their music on the differents musical supports :

A special thanks to Necky and Mitsugi for answering our questions; 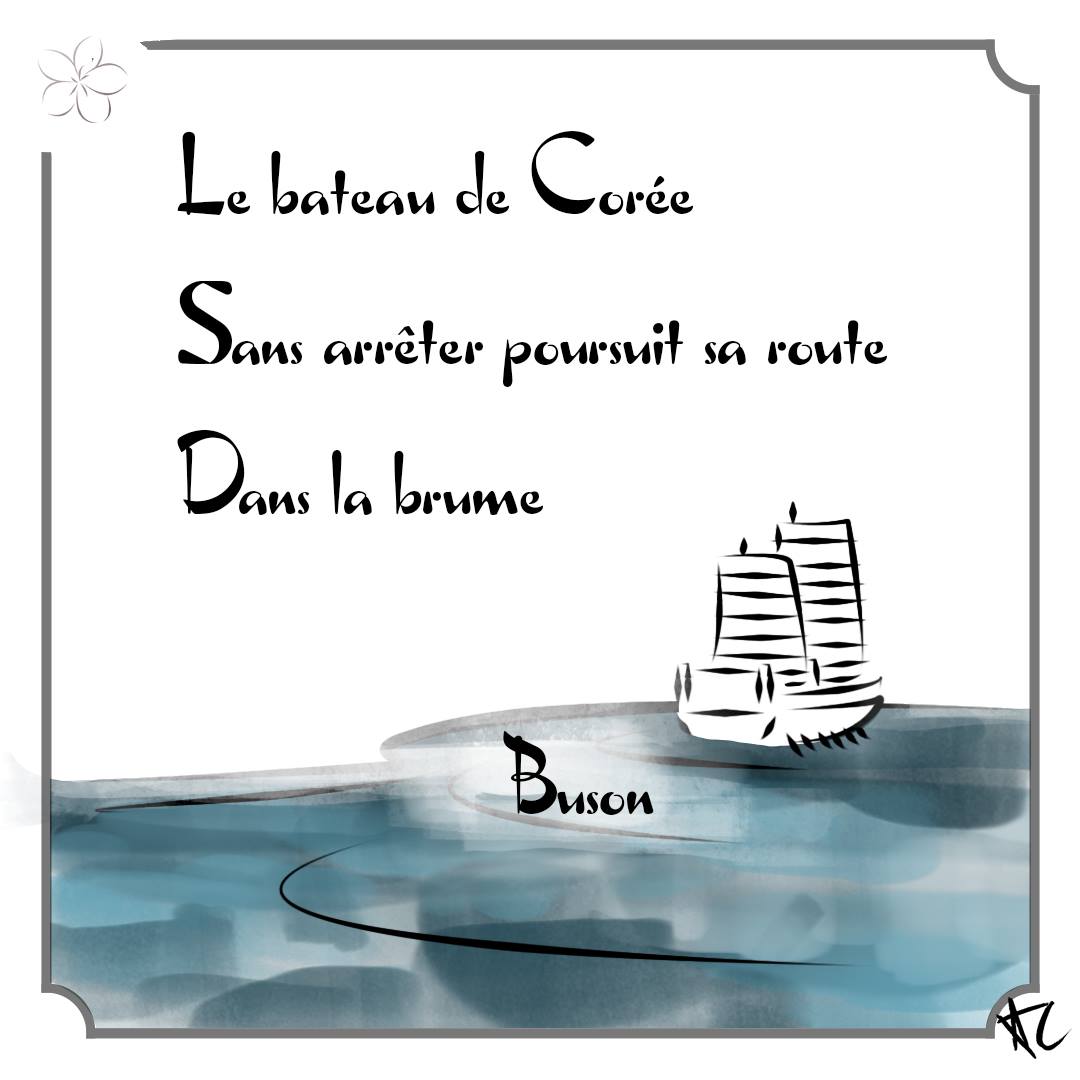